Discover the authentic and original Thailand with us. You can get to know the daily life of farmers and learn about the agricultural life and work on the fields. 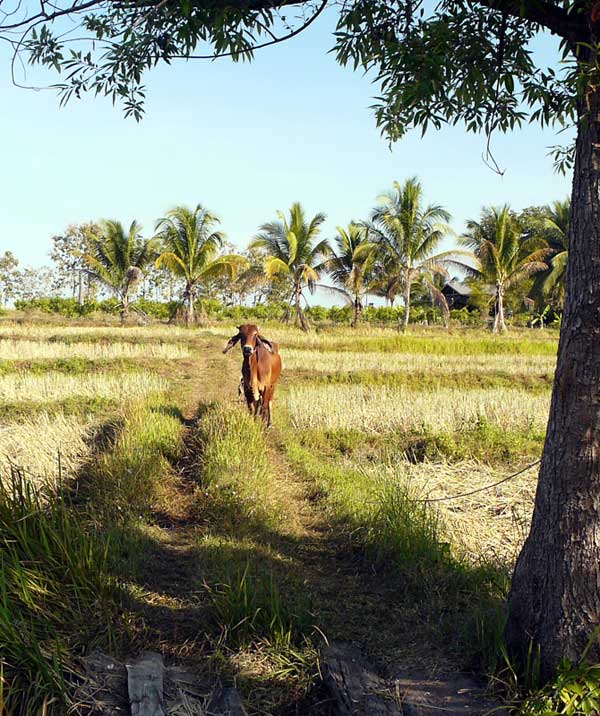 Join us for an early morning walk to our farm. Take a walk through the fields, forests and pastures before the sun fries the dewy grass. Let us show you where to gather mushrooms, how to recognize edible plants and admire the magnificent and diverse nature all around.

Ripe or sour mangos, that are offered in our restaurant orginiate from our farm. If you please, you are welcome to come and harvest some fruits and vegetables yourself.
Sweet or sour tamarind, papaya, Jack fruit, pine apple and other delicious seasonal fruits enrich our menu throughout the year. Maybe you have also heard of the Durian, queen of all fruits, with its particularly juicy and tasty flesh.

In November and December, it is rice harvesting in Isaan According to FAO statistics, in 2009, Thailand was the 6th largest rice producer and with some 8 million tons annually the largest rice exporting nation in the world.
Sticky rice and jasmin rice are the main varieties that are being grown in Isaan. Well covered with gloves, hats and long sleeves to protect their skin from the burning sun, farming aids harvest the rice in tiresome work with a sickle.

The daily chores start in the early morning hours. Due to the high temperatures, labour is interrupted around noon. Then, people gather for a sociable and copious meal. In the shade of the trees or in a simple wooden hut, papaya salad is being prepared and consumed together with sticky rice from bamboo baskets. Dried or fumed fish makes the meal complete. Freshly plucked bananas, mangos or pitahaya serve as desert.
Tufts of rice serve as flails just as in pre-industrial agriculture. However, machines take over an increasing part of the agricultural work and small mobile flails become more and more common even in the most rural areas. Whoever has a sense of business creativity invests in modern technologies and finances the machine by renting out their own and their families labour craft and machines during harvest. 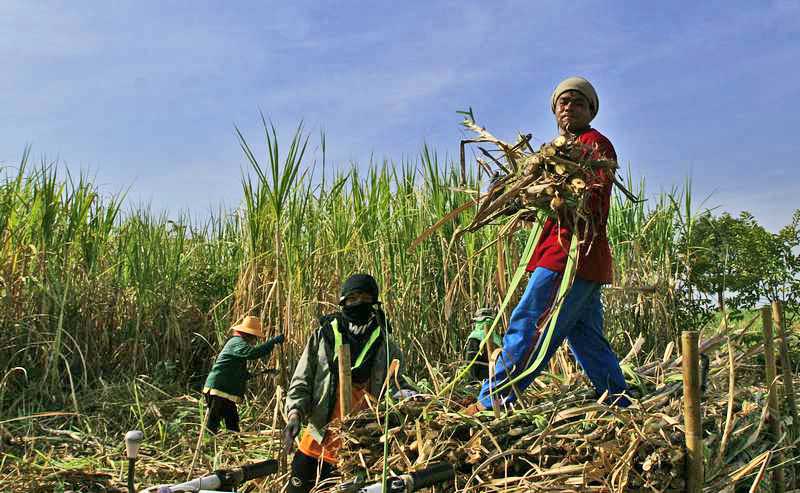 Sugar cane is planted by putting small parts of the blade into the soil, lightly covered earth. One to two weeks later, the scions start growing roots and new blades (canes). In our region, sugar cane can be harvested up to three times per year.

Sugar cane harvest is mostly still  done manually. Using a machete, the blades are cut just above the ground and the leaves that do not contain any sugar are cut off. The sugar canes are then being bind together and brought to the next collection point where they are being charged on a truck that takes the load to the next processing plant. For a faster harvest, the plantations are sometimes burned down. The fire burns weed and leaves – surprisingly, the sugar canes remain rather undamaged from the heat and can thus be harvested much better. 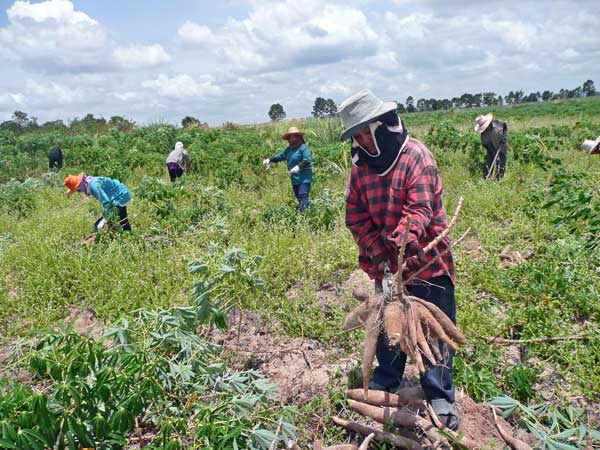 Maniok (Cassava) Thailand is the world's first maniok producer. Out of 240 million tons that were produced in 2009, Thailand alone produced some 30 million.
Maniok is being planted at the beginning of the rainy season Similarly to the sugar cane production, little shoots are being planted into the soil and covered with earth. Some 9 to 12 months later, the bulbs can be harvested.
They can then be processed and deliver the well-known Tapioca – a starch granulate that is much used in the preparation of pita bread, sauces, soups and salty snacks (manioc chips) or animal food. Today, manioc as also entered the market of bio gas. The European Union imports some 3,6 million tons of Tapioka from Thailand per year.

We use cookies on our website. Some of them are essential for the operation of the site, while others help us to improve this site and the user experience (tracking cookies). You can decide for yourself whether you want to allow cookies or not. Please note that if you reject them, you may not be able to use all the functionalities of the site.